Contact Yoga, as Ken Scott Nateshvar called it, was a precursor to AcroYoga.  Tesh as we would call him was a most inspiring figure to me, as well as to AcroYoga founders.  I was lucky to meet his teachings in 1999 in Boston, then him personally at a workshop he gave in New York in 200, take his teacher trainings back in 2003 and 2004, just before he retired.  The quality of his touch and presence was shining directly from his heart and it's still a mystery to me how he could teach a class with a direct connection to people's true essence.  Yes there was partner yoga, flying acrobatics, leg loving thai massage and something like therapeutic flying, but mostly it was a dance of energies, a sort of healing contact improv of the heart.  He had also written principles, which were in the teacher training manual.  Luckily someone transcribed them here in original English (and my French translation here).
This post is to pay tribute to him and his teaching, alive in AcroYoga, but also in Tulayoga which i was amazed at how it manifests Tesh's principles, although it came independently. Where great minds .. and hearts, meet. 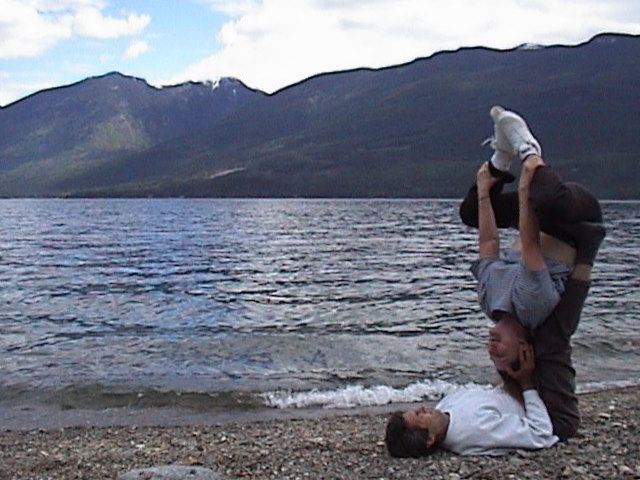 Tesh, at the Contact Yoga teacher training i took in British Columbia 2004

Posted by acroMarco at 6:18 PM